A legacy forgotten — Chester Congdon and the North Shore Drive.

Few people have spent more time and money to bring positive change to Minnesota and especially Northern Minnesota. Yet most of his good works are forgotten.

They are so forgotten that it takes significant work to unearth it. Thankfully, most of us are still able to enjoy the fruits of his labor. Few of his visions or projects are as successful as his dream of a North Shore Drive.

His title for the project — the Lake Superior International Highway. 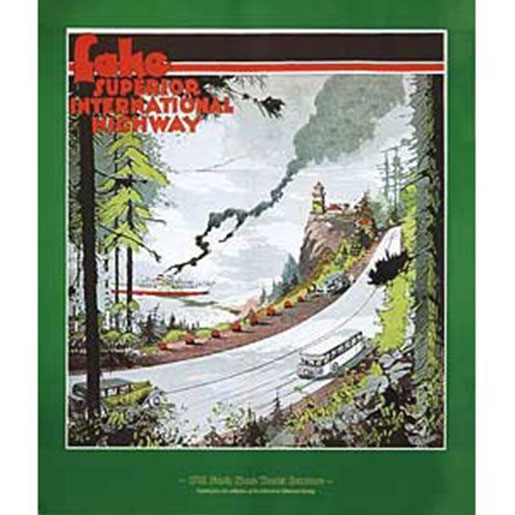 Here is the story.

The story of the North Shore Drive really starts with the construction of the Skyline byway in Duluth. In 1888, a Duluth Parks board member, William Rogers has the grand idea of a roadway that would take in all the grand vistas of the City of Duluth. Connected to the roadway would be the City’s grand parks. From Jay Cooke to Lincoln Park to Chester Park.

Duluthians were very proud of their drive. One of those Duluthians caught with the bug was Chester Congdon.

In 1909 Chester Congdon was the 51st district representative in the State of Minnesota. He represents East Duluth to Grand Marais to International Falls. As an elected official he campaigned throughout that region extensively. It wouldn’t be hard to see how he got the idea. Here was this great drive in Duluth connecting all these grand natural park destinations, Duluth’s Skyline Drive. This drive was gaining fame. It would be even more of a draw to connect those larger and more spectacular natural parks up the north shore.

At the time, road travel on the north shore was dicey with a dirt road that came and went with the rains. In addition, boat travel was possible, but not nearly as convenient as a road up the shore would be. The north shore vacation that is common today was not suitable for most. Chester wanted to change that.

It is during his time as a legislator that he develops his plan for the building of a highway to connect Duluth to Canada. He termed it the Lake Superior International Highway.

As is true today, big plans like this do not start in the public sphere. So this is where the story gets complicated.

Here is what we know.

Starting in at least 1909, Chester begins purchasing land up and down the North Shore. Keep in mind that he owned a significant amount of land on both sides of where Glensheen is today. It was purchased under the name of one of his companies, the Duluth East Land Co. Several land owners refused to sell to him. In the 1909 or 1911 session, a law passes allowing cities of the first class (Duluth, Minneapolis, and St. Paul — the tri-commission as they were referred to) to annex land outside of the city limit for transportation reasons. Interesting…

On May 26th, 1913 — Chester goes public with the plan, by asking for the support of the City of Duluth Commissioners. Who support the project.

Here is newspaper article on May 30th from the Duluth News Tribune describing the plan. 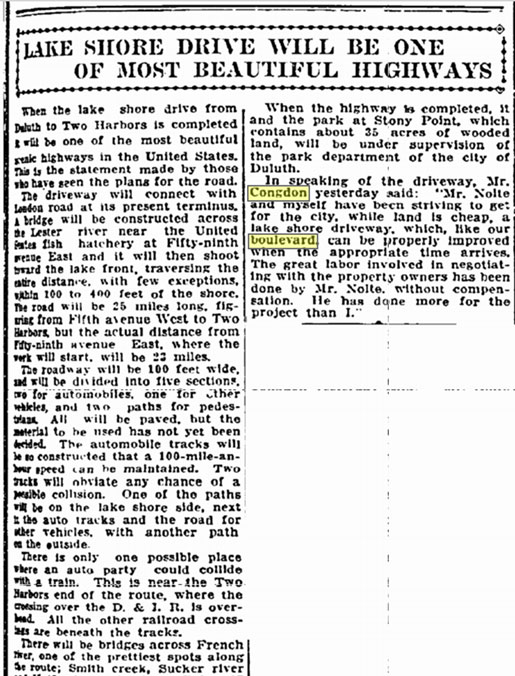 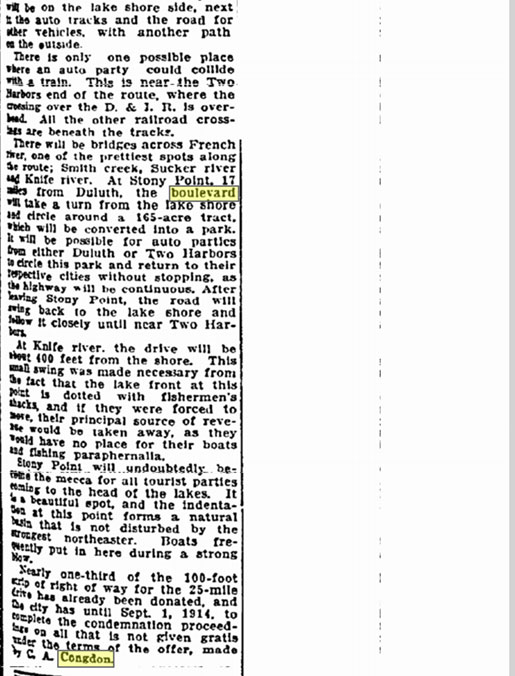 Chester announces that he is willing to reimburse the cost of the court procedures and the cost of the land he was unable to purchase outright. This is why the city limits extend 14 miles up the shore today. It is also why we call it Congdon Boulevard.

Here was the idea.

Lets build a road like Skyline starting at what is today, London Road and then connect Seven Bridges Road to the shoreline of Lake Superior, then have it hug the shoreline as much as possible all the way to Canada. Exactly how Skyline connects Chester Park to Lincoln Park, he wanted a roadway that connected Seven Bridges to Gooseberry to Manitou to Port Arthur. It would allow more of the public to enjoy these great places we all love today. Not only was this road meant to make things more accessible, but also Chester made stipulations in the lands he gave that the lakeside land would not be developed. Allowing for an uninterrupted shoreline for the public to enjoy.

Oddly, but maybe on purpose it would highlight… Glensheen near the start of the drive.

The first section was the part he spent his resources on, (the section that is called Congdon Boulevard today?) Duluth to Stony Point. The idea was to build a road with a matching pedestrian walkway for bikers and walkers alike alongside all the way to a grand new park to be built at Stony Point. As the road approached Stony Point it would move away from the Lake and towards Two Harbors. Another road would lead you to the shoreline to Stony Point then connect back up to the main road. This way, you could encircle the entire grand new park.

Chester quickly had backers — None other than the other famous Duluthian, Leonidas Merritt. (June 20, 1913 Duluth News Tribune) 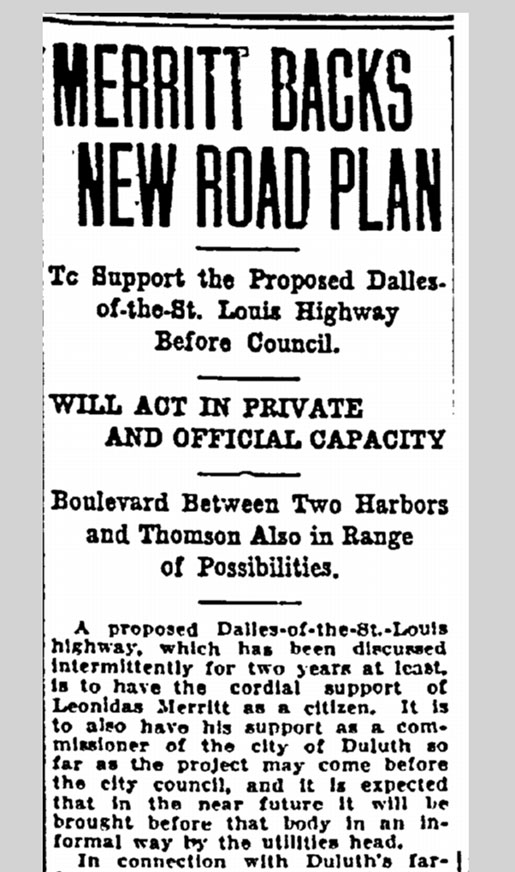 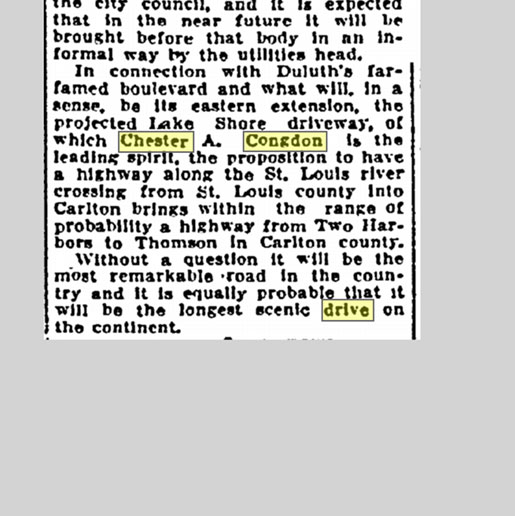 Here is some newspaper description of the process of Chester reimbursing the city for condemnation of the land up the north shore. Chester agrees to reimburse cost which may eventually reach $1,000,000. (March 12, 1914 Duluth News Tribune)

In 1915, progress is moving ahead so much on the idea of the drive, that when they celebrate the new Armory, they mention how it will be “the gateway of the magnificent drive which will lead to the Congdon Boulevard” 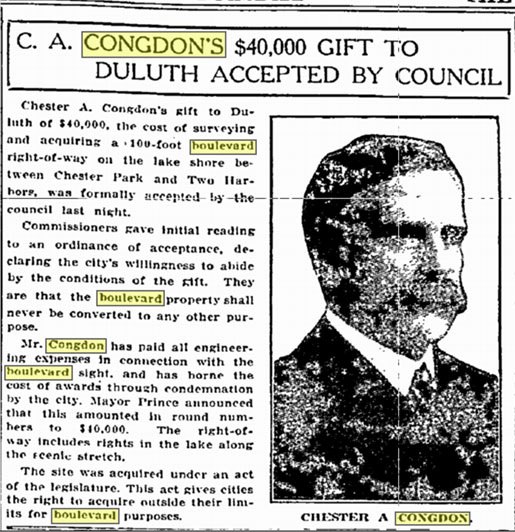 Then in 1916, Chester Congdon passes away. Many think the idea is now over. Though in his obituary, they celebrate his vision and commitment for the North Shore Drive. (November 22, 1916 — Duluth News Tribune) 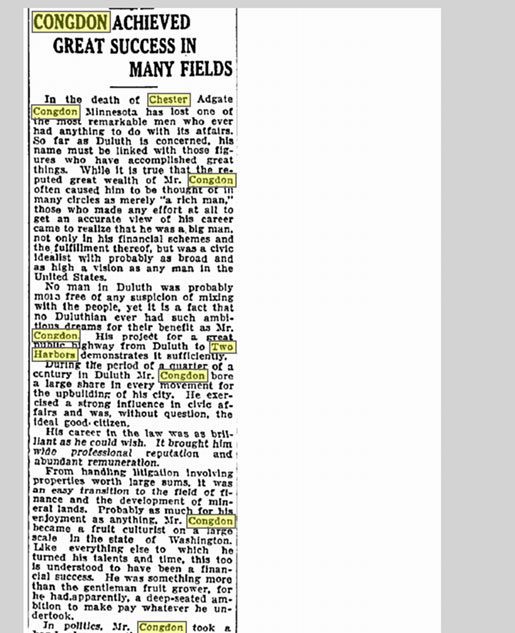 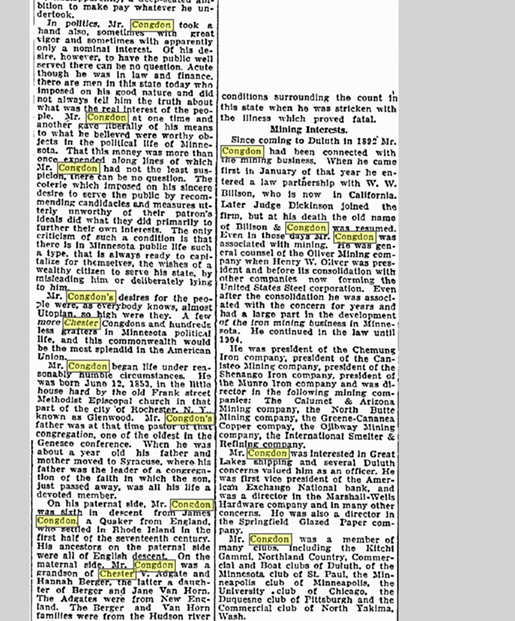 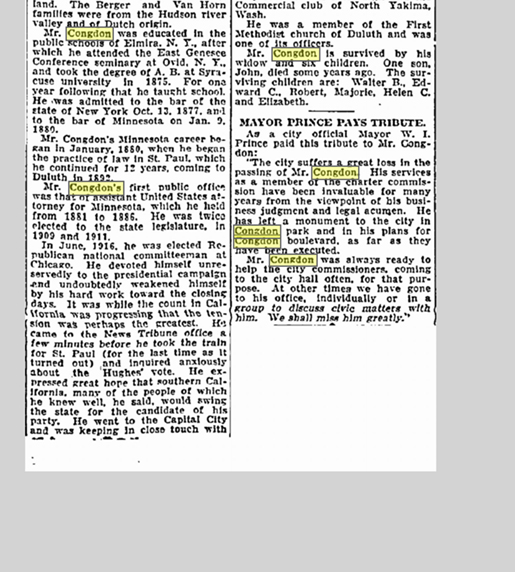 In 1920, with Skyline Drive fever still in motion, Mayor Snively works with Clara Congdon, the wife of Chester. She and the family agree to help support Chester’s intentions. On March 8th, 1920 the family agrees to donate $125,000 towards the paving of the “Congdon Memorial Boulevard”. 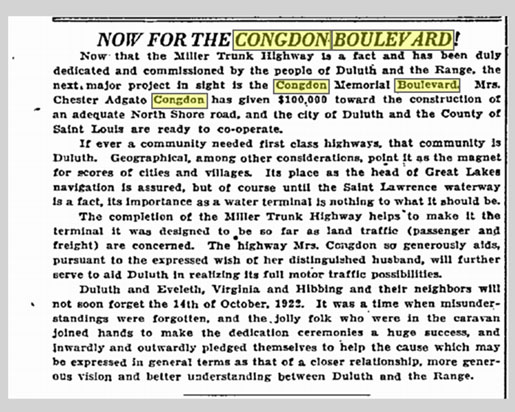 Eventually, the city and county contribute to the paving of the road, with each party (Congdons, City and County) paying each a 1/3 of the cost of the boulevard.

The road that is eventually built is not the whole grand vision of Chester as he outlined in 1913, but the road is built. The Lake Superior International Highway becomes a reality. Today we call it the North Shore Drive and is one of the main tourist destinations in Minnesota and beloved by many around the world. 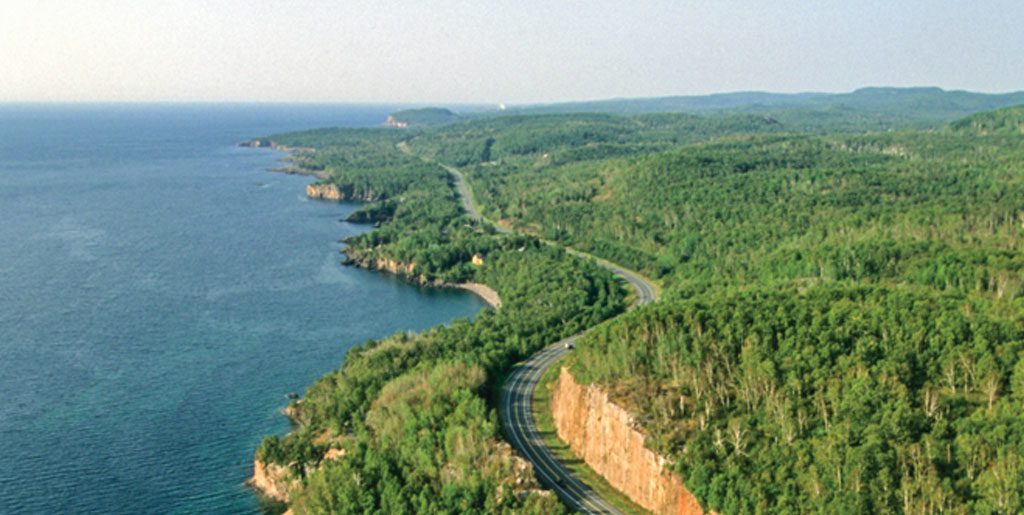