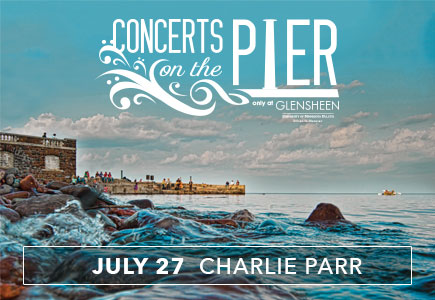 The Charlie Parr Concert on the Pier has been canceled due to poor weather conditions. Please join us next week, on 8/3/16, as Charlie Parr opens for Red Mountain. This conclusion to Glensheen’s Concerts on the Pier series will highlight both artists in an extended concert.

On July 27th, Glensheen’s continues its free Concerts on the Pier series with Charlie Parr.

An easily confused and very shy individual, Charlie Parr has been traveling around singing his songs ever since leaving Austin Minnesota in the 1980’s in search of Spider John Koerner, whom he found about 100 miles north at the Viking Bar one Sunday night. The experience changed his life, made him more or less unemployable, and brings us to now: 13 recordings, 250 shows a year or more, 200,000 miles on a well broke in Kia, and a nasty fear of heights. Resonator fueled folk songs from Duluth Minnesota.

Free concerts have been happening at Glensheen every Wednesday night in July for many years. However, last year marked the first time all of the bands played on the 100-foot pier extending into Lake Superior. Each of the bands have Duluthian ties making the series a showcase for our region and Minnesota’s talent.

Concertgoers line Glensheen’s Lake Superior shoreline while kayakers and boaters enjoyed the free music from the water. Concerts on the Pier is a celebration of the Lake, local bands, one of Duluth’s historic locations and Minnesota.