Concerts on the Pier: Haley Bonar 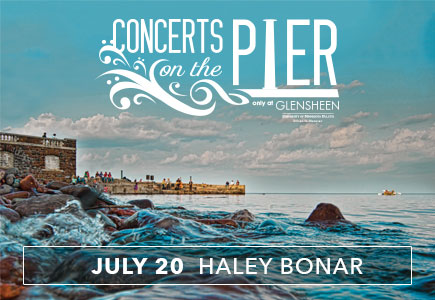 On July 20th, Glensheen continues its free Concerts on the Pier series with Haley Bonar.

Haley Bonar has been releasing music under her own name for over a decade now, and she seems to get stronger with every iteration. The alt folk country singer songwriter spent a brief time in Duluth before being discovered by Alan Sparhawk, front man of internationally acclaimed Duluth band Low, and the rest is history. Her next release is Impossible Dream, the follow-up to 2014’s critically acclaimed, Last War, due out in August 2016.

Free concerts have been happening at Glensheen every Wednesday night in July for many years. However, last year marked the first time all of the bands played on the 100-foot pier extending into Lake Superior. Each of the bands have Duluthian ties making the series a showcase for our region and Minnesota’s talent.

Concertgoers line Glensheen’s Lake Superior shoreline while kayakers and boaters enjoyed the free music from the water. Concerts on the Pier is a celebration of the Lake, local bands, one of Duluth’s historic locations and Minnesota.